Report on ‘Animal Experimentation: working towards a Paradigm Change’ Book Launch at the European Parliament 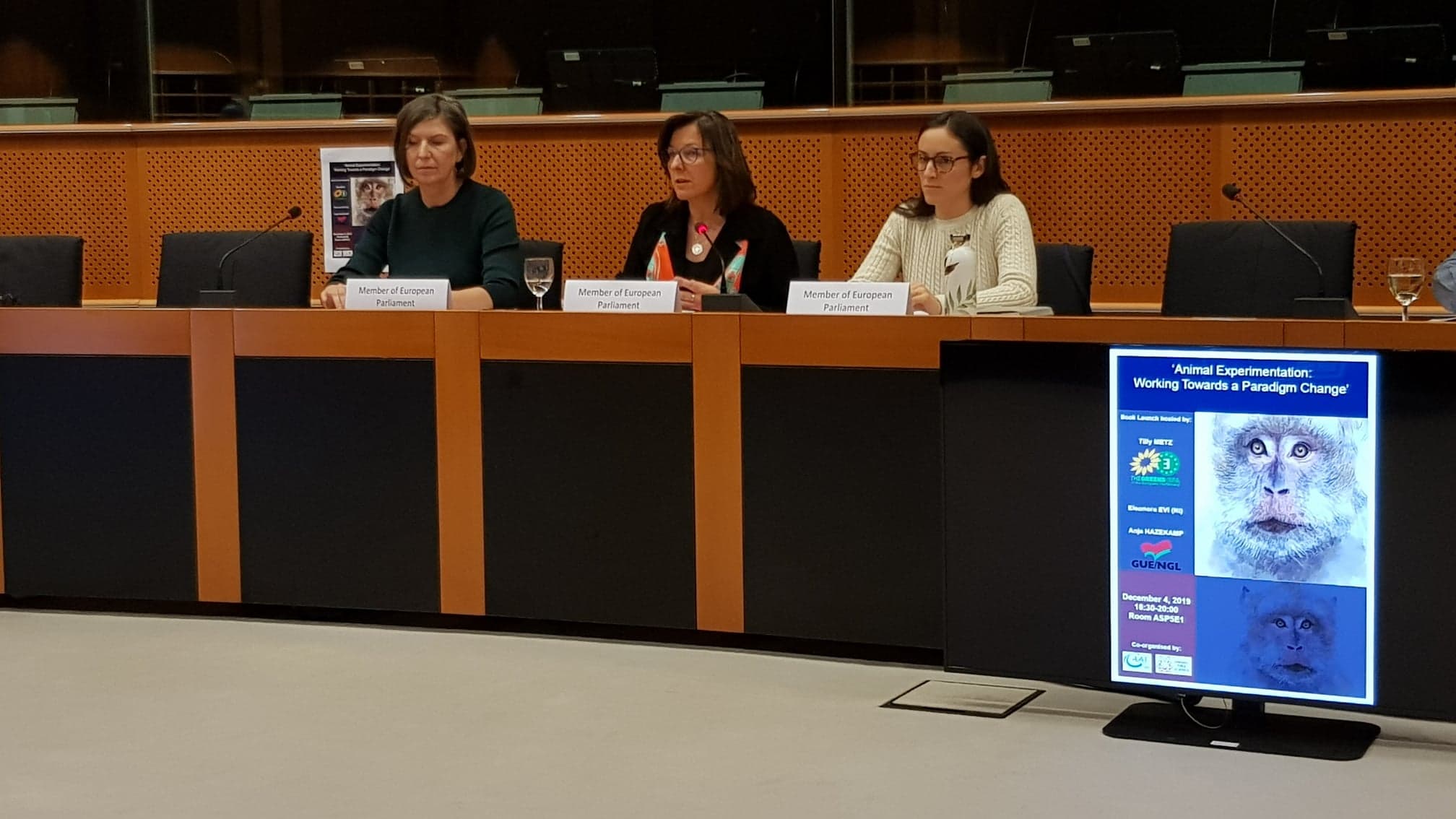 On December 4, 2019 Animal Free Science, together with the Center for Alternatives to Animal Testing (CAAT) organized the launch of the book project entitled ‘Animal Experimentation: Working Towards a Paradigm Change‘ (Brill open access) at the European Parliament, to engage with scientists and politicians and stimulate the transition to better science and healthcare by replacing animal experiments. The event covered why and how to shift away from animal use in science, the politics and legislation of animal experimentation, the importance of human biology based research to improve drug safety, recent developments in animal-free methods, as well as a discussion on how to achieve the final goal of the European Directive 2010/63 to fully replace the use of live animals in science.

The event was co-hosted by three MEPs, -Tilly Metz (Greens, Luxembourg), Anja Hazekamp (Party for the Animals, Netherlands) and Eleonora Evi (5-Start Movement, Italy) who explored different chapters together with five invited scientists who contributed to this book project. “We need to move out of the dark tunnel of animal testing and define ambitious timelines for the full replacement”, said Tilly Metz.

We need to move out of the dark tunnel of animal testing and define ambitious timelines for the full replacement. – Tilly Metz, MEP (GREENS/EFA, Luxembourg)

Why and how to shift away from animal use in science

It is time to move beyond the 3Rs and approach science in a more human relevant way by focussing on the 1R of Replacement. – Kathrin Herrmann (lead author and co-editor of the book-project, CAAT)

The launch of Animal Experimentation: Working Towards a Paradigm Change is also timely as 2019 marks the 60th anniversary of the 3Rs (Replacement, Reduction, and Refinement of animal experiments) first introduced by Russell and Burch in 1959 in their ground-breaking book, ‘The Principles of Humane Experimental Technique’. Their goal was to avoid the use of animals wherever possible and to improve significantly the treatment of the animals deemed indispensable, while improving the quality of scientific and medical research and testing (Russell and Burch, 1959). Kathrin Herrmann believes that proper implementation of the 3Rs concept, as intended by Russell and Burch has not been achieved: “The current paradigm is still to use animals in basic and applied research, despite the fact that there is no regulatory requirement to use animals in those research areas. It is time to move beyond the 3Rs and approach science in a more human-relevant way by focussing on the 1R of ‘Replacement’. In the areas of regulatory testing and cosmetics and some areas of education and training we can see some replacement efforts. 65% of animals in the EU however are used in the area of biomedical research. And there is little to no indication that the animal research community is moving away from animal use.”

More information can be found in Chapter 1: Refinement on the Way Towards Replacement: Are We Doing What We Can?, and in a recent food for thought article entitled ‘Beyond the 3Rs: Expanding the use of human-relevant replacement methods in biomedical research’.

At the EU level, unfortunately, there is neither an overall strategy for phasing out the use of animals for scientific purposes nor for monitoring the implementation of the paradigm shift.

The analysis conducted by Carolin Spicher and her colleagues from the German organisation ‘Menschen für Tierrechte’ concluded that there currently is no master plan to actively pursue the objectives of Directive 2010/63/EU at a national or EU level. To get out of this current paradigm they propose a 5 pillar approach:

The Netherlands became the first EU Member State to present a road map for “phasing out animal procedures and stimulating innovation without laboratory animals.” (Netherlands National committee for the protection of animals used for scientific purposes, NCad, 2016). According to Carolin Spicher other Member States should follow this example: “Hopefully the Dutch strategy will act as a driver for other countries to follow this path. Unfortunately, no EU Member State, so far, has publicly spoken out in favour of the Dutch initiative.” On the contrary, its timeline has been criticized as being unrealistic, risking the safety of medical treatment, and hampering basic research. Only the government of the Brussels-Capital Region has put forward a plan to phase out animal experiments along the lines of the NCad report. “Member States should show more support for initiatives like the Dutch Road Map, which aspire to achieve the goal of full replacement stated in Directive 2010/63/EU. At the EU level, unfortunately, there is neither an overall strategy for phasing out the use of animals for scientific purposes nor for monitoring the implementation of the paradigm shift. It is important that changes take place, but how they take place is subject to debate.”, said Carolin Spicher.

More detailed information can be found in Chapter 3: How Can the Final Goal of Completely Replacing Animal Procedures Successfully Be Achieved?

Politics and legislation of animal experimentation

Scientific progress does not necessarily equate to changes in practice, in public policy, or in legislation; but political progress can drive science. For this reason alone, effective political strategies are essential.

Emily McIvor from PETA highlighted the need to combine public campaigning and political activity to achieve a shift away from use of animals in research and testing. She highlighted 3 major legislative milestones that have been achieved:

At the same time Emily McIvor pointed out the key weakness in the current legislation: “We have to show that there is regulatory need for replacement because animal tests are not doing what people imagine them to be doing and in fact we cannot stay safe from chemicals or pesticides in the environment while regulators are relying on animals tests that don’t show them what the effects are in human beings.” According to Emily McIvor this paradigm shift can be accelerated by improvements in transparency, reporting, and protection of animals, as well as by increasing levels of scientific scrutiny, funding, and political will: “Experience gained at the EU level demonstrates that when public opinion—backed by convincing evidence and practical proposals—can be effectively presented, policy makers are required to balance competing interests and promote workable solutions. Scientific progress does not necessarily equate to changes in practice, in public policy, or in legislation; but political progress can drive science. For this reason alone, effective political strategies are essential.”

It is a common misconception that the animal model is an effective model. In fact it has never been properly validated. Instead we must focus on validating and implementing human-based in vitro and in silico methods in an integrated approach to understand the complexity of human biology.

According to Jan Turner from Safer Medicines Trust it is a common misconception, not only among the general public but also among scientists and regulators, that the animal model is an efficient model: “There is a considerable amount of evidence from adverse drug reactions and clinical human trials that show that animal models are not producing the results that we need. In the case of Alzheimer’s, for instance, since 1998 over 100 drugs have reached clinical trials but none has been effective in humans. A lot of resources are being put into animals testing, without little return. We have seen productivity in the pharmaceutical sector decrease exponentially and even in the last 10 years the return on investments has plummeted. Animal testing has therefore set us back.

While there are still technical issues to be overcome, the key point, according to Jan Turner for finding cures for complex human diseases, such as Alzheimer, is to understand all the components of diseases and how they develop in the human. She also emphasised that we have to use an integrative approach, as non-animal methods should not be seen as one-for-one replacements of current animal models: “The biggest barriers that we are facing at the moment is the formal validation of new human relevant innovations. In fact, the animal model itself has never been properly validated.” She concludes that human relevant in silico and in vitro innovations can offer key tools to study the complexity of human diseases in a holistic approach.

Human limitations, including bureaucracy, political malaise, and entrenchment in the scientific establishment are as great, if not greater, barriers to the replacement of animals in testing.

Katy Taylor for Cruelty Free International illustrated important recent developments in alternative methods for regulatory testing: “The past 30 years have seen a dramatic increase in the development of alternatives to animals. Advances in replacements are more recognized in the field of toxicology because it is this area that has received the most attention. Regulatory, typically toxicity testing, is only a small proportion of the global testing on animals (8% in Europe); but due to the standardized nature of the tests, replacement of just one test has a permanent effect on the use of animals in that area and is, therefore, seen as particularly worthwhile.”

She also discussed the barriers to the implementation of these alternatives and how these might be overcome: “Human limitations, including bureaucracy, political malaise, and entrenchment in the scientific establishment are as great, if not greater, barriers to the replacement of animals in testing.” Once an alternative has undergone formal validation, it is crucial step to delete the corresponding animal test.” One example of such an enforcement failure is the case of the pyrogenicity test. Despite the acceptance of the human blood-based Monocyte Activation Test, pyrogenicity testing in rabbits has increased in the European Union.

Katy Taylor listed three key action points for the European Union to ensure that when alternatives are developed, they are actually used:

More detailed information can be found in Chapter 24: Recent Developments in Alternatives to Animal Testing

Achieving the final goal of full replacement of animal experimentation

All scientists present agreed that animal experimentation has insurmountable shortcomings and that the continued use of animals is in fact a hindrance to scientific progress and improvement of human healthcare. The challenge of achieving the shift away from the current paradigm by replacing animal experiments with human-relevant models is working together from all sides:

2. Side-to-side approach: Replacement scientists need to promote their methods, and why they are superior to the prevalent paradigm of animal use. The outcomes of animal experimentation need to be made transparent and critically appraised.

3. Top-down approach: Politicians at the national and at the EU level should increase scrutiny to ensure that the current legislation is properly implemented. Regulators have to be involved from the start of the development of animal-free innovations.

This is where the new programme ‘Animal Free Science’ plans to play a crucial role in Belgium. Animal Free Science focusses on education, knowledge sharing and connecting scientists and politicians to conduct innovative, animal-free science.