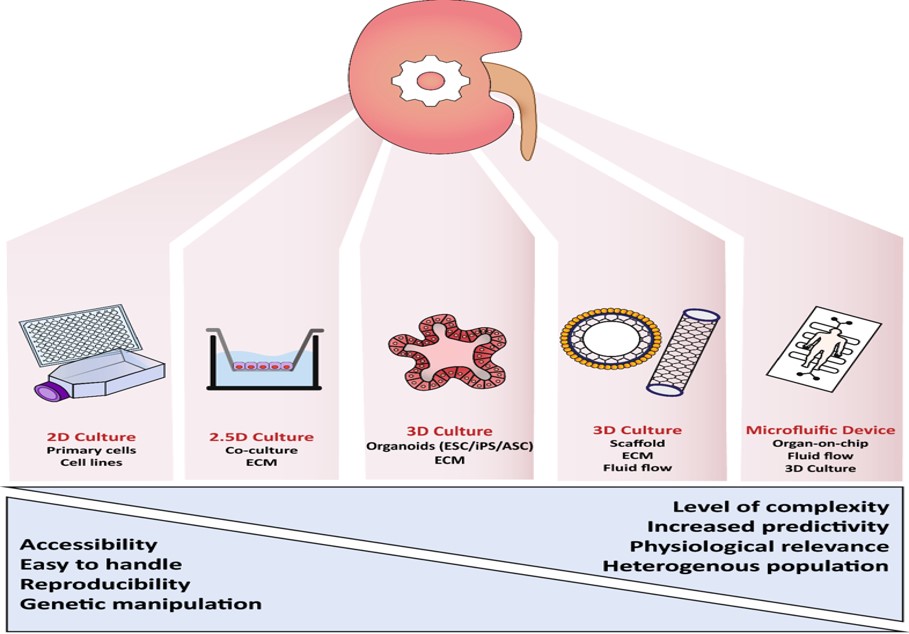 A new review from scientists at the University of Utrecht considers how the complex nature of the kidney complicates in vitro modeling & suggests where 3D culture & organoid advances can be used to develop better predictive models that could reduce drug-induced nephrotoxicity.

The kidneys play an essential role in preserving homeostasis of the body’s internal environment, including regulation of water, electrolyte, nitrogen, and acid–base balances. They also control the red blood cell production and blood pressure (Bello-Reuss and Reuss 1983). Impaired renal function is commonly observed in clinical practice and is often associated with the use of drugs. One-third of all drugs and drug candidates are excreted unchanged from the body by the kidneys, and drug-induced nephrotoxicity accounts for 20% of all episodes that lead to acute kidney failure. Due to the complexity of the kidney, as an organ containing specialized structures and multiple cell types, it becomes quite difficult to find a reliable model system to study the effects or toxicity of drugs and their metabolites on this organ. In this review, detailed information on drug-induced kidney injury mechanisms and available in vitro models to predict this with relevant translational biomarkers will be discussed, with an emphasis on novel developments in the field of microphysiological systems that meet the requirements of the 3Rs (replacement, reduction, refinement) of animal experiments for drug safety screenings.

Until recently, researchers were left with only two options: in vitro cultures of primary human cells or the use of animal models, both having limitations. Primary cells are used as they mimic the physiological state of cells in vivo most closely; however, these cells have a limited growth capacity and tend to lose their phenotype over time. Despite these limitations, primary renal cells still remain a reliable option to study basic renal cellular functions and the effects of nephrotoxicants thereon. To overcome the difficulty in culturing primary cells, immortalized cells can be used because of their capacity to grow and divide indefinitely. The disadvantages of these cells include the immortalization procedure that by itself may result in some changes that, over time, can alter the functions and characteristics of cells (Bajaj et al. 2018). Animal models are used as they can fill the gap that in vitro models often have, viz, the lack of physiological resemblance. However, the use of animal models is expensive, requires a lot of time and expertise, has low throughput potential, poses ethical issues, but most importantly, these models often do not correlate to human systems (Barré-Sinoussi and Montagutelli 2015).

Improving predictability of in vitro models fits also in the scope of the 3Rs (replacement, reduction, refinement) of animal experiments. This could reduce costs of the pre-clinical and clinical phases of drug development by filtering out the harmful compounds. However, more importantly, it also meets the societal demands to reduce the number of animals in drug development. Drug regulatory authorities, such as FDA and EMA, support the use of physiologically based pharmacokinetic (PBPK) modeling as a tool to facilitate the process of drug development. In vitro-to-in vivo extrapolation (IVIVE) can be coupled with PBPK modeling as a way to predict the in vivo pharmacokinetic characteristics of a new drug based on in vitro studies. In vitro studies can provide information regarding drug–enzyme and drug–transporter interactions. However, the full understanding of the absorption, distribution, metabolism, and excretion (ADME) processes is not feasible. By extrapolating complex scenarios observed in vitro while having in mind that intrinsic and extrinsic factors can alter the kinetic values, one can identify optimal dosing regimens for individual patients (Rostami-Hodjegan 2012; Zhao et al. 2011; van der Made et al. 2019).

The kidney is frequently involved in adverse effects caused by exposure to foreign compounds, including drugs. An early prediction of those effects is crucial for allowing novel, safe drugs entering the market. Yet, in current pharmacotherapy, drug-induced nephrotoxicity accounts for up to 25% of the reported serious adverse effects, of which one-third is attributed to antimicrobials use. Adverse drug effects can be due to direct toxicity, for instance as a result of kidney-specific determinants, or indirectly by, e.g., vascular effects or crystals deposition. Currently used in vitro assays do not adequately predict in vivo observed effects, predominantly due to an inadequate preservation of the organs’ microenvironment in the models applied. The kidney is highly complex, composed of a filter unit and a tubular segment, together containing over 20 different cell types. The tubular epithelium is highly polarized, and the maintenance of this polarity is critical for optimal functioning and response to environmental signals. Cell polarity is dependent on communication between cells, which includes paracrine and autocrine signals, as well as biomechanic and chemotactic processes. These processes all influence kidney cell proliferation, migration, and differentiation. For drug disposition studies, this microenvironment is essential for prediction of toxic responses. This review provides an overview of drug-induced injuries to the kidney, details on relevant and translational biomarkers, and advances in 3D cultures of human renal cells, including organoids and kidney-on-a-chip platforms.

Mice brains are too different from humans’ to model neurodevelopmental disorders